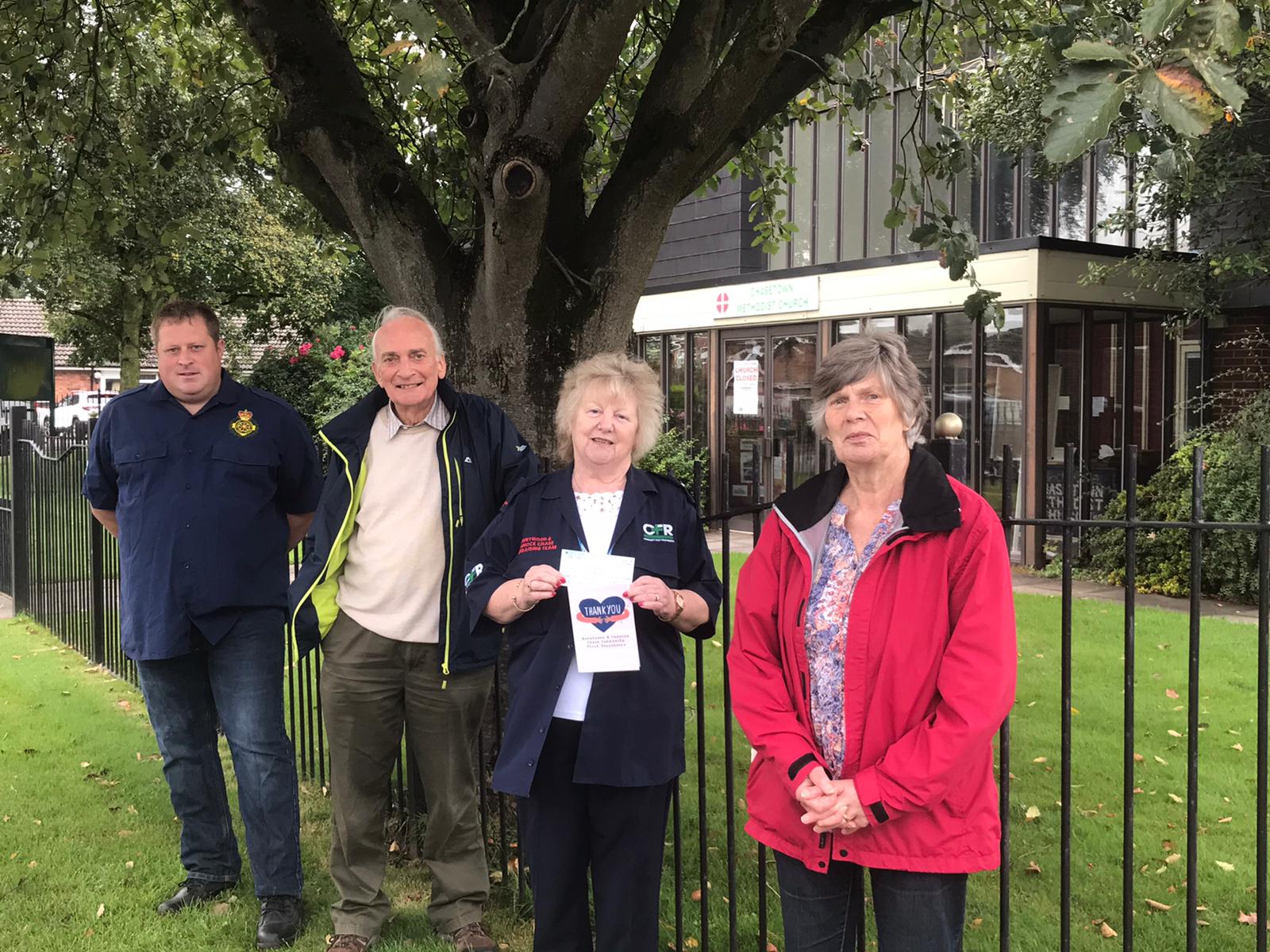 It was before the start of this session when one of the Regnal Circles members, Martyn Bourne, suddenly collapsed and stopped breathing. The CFR scheme members in attendance immediately sprang into action and started Basic Life Support. One of Support Team members dialled 999 and rushed outside to retrieve the public accessible defibrillator located on the building. After just a few minutes of CPR and a shock of the Automated Defibrillator Martyn’s heart began to beat again and a ROSC (Return of Spontaneous Circulation) was achieved.

An ambulance arrived within 6 minutes of the call and transported Martyn on blue lights to New Cross Hospital where he was immediately assessed. Martyn underwent emergency quadruple heart bypass surgery. The Consultant visiting Martyn the next day asked what type of defibrillator was used as this can help choose the treatment plan. Martyn’s Wife contacted the CFR’s Business Liaison Officer, Linda King who was also present during the evening, and within two hours of the call Lee Floyd, CFR who worked on Martyn, delivered it to the Ward for the Consultant to review. The Consultant was amazed this was achieved.

Martyn was in hospital for just over 2 weeks. He is progressing well and says, “in fact I feel better than I have done for a considerable length of time”. Following his heart attack Martyn and his wife, Gill, created a ‘tick list’ of things they wanted to do and on that list was to meet their volunteer life savers.

So, on Wednesday 23rd September 2020 that item was ticked off. CFR Lee Floyd, Support Team Member Gaz Smith and Business Liaison Officer Linda King, who were all present on the evening, met Martyn and his Wife at Chase Terrace Methodist church. They were able to answer any questions Martyn had and see the remarkable progress he is making. All three were given a gift & Thank You card and the group was presented with a donation of £1600 to be used towards the purchase and siting of a new defibrillator for the community.

Linda said “It was a very emotional and thought-provoking meeting. It was great to see Martyn looking and doing so well. The ambulance crew and hospital staff all told them that if we had not been there that evening Martyn would of likely have not survived. We are very thankful for Martyn’s donation which will be used towards potentially saving someone else’s life in the community”